Amanda “Lioness’ Nunes has checked off every box in women’s MMA to get the title of GOAT. She took some time to develop and even lost via TKO to Cat Zingano back in 2014; however, The Lioness went on a rampage after that loss and is currently fighting an 8 fight win streak which beats Rousey’s UFC win streak of 6. If you have heard of a big name in women’s MMA, more than likely Nunes has fought her and defeated her with Cat being potentially the only survivor.

The one thing these two women have in common is that they both defeated the great Ronda Rousey. Holly Holm was the first to defeat Ronda ending her title run in 2015 and being a champion in kickboxing before ever getting into MMA we all had high hopes for Holm that she just never lived up to. Holly immediately dropped the title to Miesha Tate in her next fight and lost to Valentina Shevchenko and Germaine de Randamie in the two following both by unanimous decisions. Finally catching a break, the UFC threw her a softie and paired her with Bethe Correia, whom she fought closely with despite the fact that she is a much better fighter on paper before finally knocking her out in round 3. We all thought Holly had gotten back on track, but then she decided to challenge the THEN women’s GOAT Cristiane Justino aka “Cyborg’, who outclassed Holly over 5 rounds which is something she had never done before.

Holly appears to have an outdated style of fighting in the modern era of MMA. She’s almost nearing that cut off age of 40, where I count fighters out unless they are a VERY special case at 37. If she cannot strike at air from a distance and “Kiya’ her way to a decision, she doesn’t tend to win these days.

Nunes, on the other hand, is trending in exactly the opposite direction. She has stepped up in competition every time she gets in that cage and has crushed her opposition. She defeated 125 lbs champion Valentina Shevchenko over 5 rounds not once, but twice. She spoiled Ronda’s comeback with a KO more brutal than Holly’s over Ronda. She TKO’d Rocky Pennington and did the impossible by moving up to 145 and completely destroying Cyborg in less than a minute. Both women are strikers, so this fight will likely be contested on the feat. Holly cannot contend with the speed and power that Nunes brings to the table and Nunes will have no problem getting around the kicks of Holm to land with her speed. Holly may be tough but, when Nunes wants the finish, she gets it. Nunes can fight a full 5 rounds in a grueling war and she can finish it in less than 60 seconds. I will play Nunes straight. I will play Nunes inside the distance. I would use Nunes in parlays. I don’t use the “L’ word in betting, but if there ever was a lock&hellip; it’s Nunes. You can get her at -300 right now and that price is only going to go up as the fight gets closer. 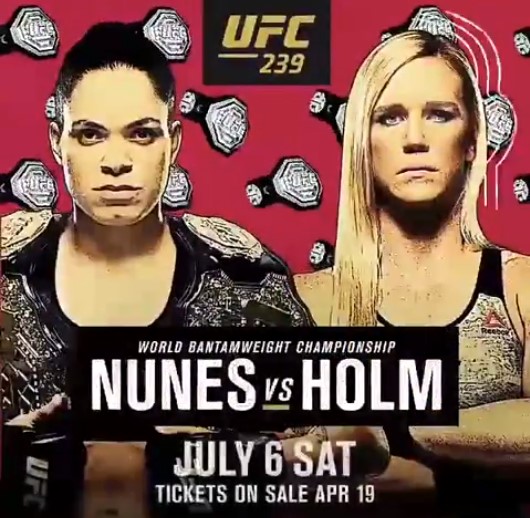