At the start of the competition, bookies rolled out freshly updated World Cup futures and USA, the 2015 champions, were the top faves going into France. Hardly surprising given the USWNT is going for a fourth title in eight World Cup tournaments.

Since 1991, only four nations have lifted the coveted title and only seven nations have featured in the final (Table 1), and no nation has been as dominant as the Americans who have won three titles and reached four finals. Germany is the second best in the history of the game with two titles and one runner-up finish, while Japan became the first Asian nation to win a FIFA World Cup (including both men and women).

Now that we are on the cusp of the final group matches we revisit the futures market and weigh in on the updated World Cup futures in relation to the results of the first two rounds. How do the nations measure up and which teams are the legitimate contenders. It’s worth mentioning the women’s World Cup can be tough to predict as the top two teams in each group advance along with four of the best third-placed teams. Essentially, just over 60% of the field will go into the last 16, so anything can happen.

USA– +175 to win Outright with BetOnline The Americans entered the competition as the team to beat, and so far their title defence campaign has gone to plan. Collecting six points and sat lotus atop group F with a massive goal differential to their favour sees them through to the knockouts. They opened with a 13-0 beat down over Thailand followed by a 3-0 victory over Chile.

A winning start to their campaign does underscore their favouritism in overarching markets, but their first two games couldn’t have been more different in terms of quality of opponent and result. One wonders whether the Americans have been truly tested yet. Let’s face it, they had one of the easier groups to contend with on the whole. Not to mention the competition is going to get tougher once the knockouts get going.

If there is a test to be had for the Americans it will be in round 3 when they take on Sweden, a legitimate contender in the competition despite rather heavy +2800 odds to win outright.

France &ndash; +300 to win Outright with BetOnline Hosts France come into this competition as the second overall favourites, but expectations run higher following the French men’s national team’s victory in FIFA World Cup 2018. Can the damsels live up to the pressure and expectation?

Two rounds into the competition and France is off to a positive start having won both matches and collecting maximum points. They opened with a commanding 4-0 win over South Korea and followed up with a 2-1 win over Norway. All in all, they are through to the knockouts and they are a win away from securing top spot in group A.

Of course, France can’t take their final group stage match for granted. Nigeria (+25000 to win outright with BetOnline) are in the running for a second place finish in Group A or, potentially, one of the four best third-place finish spots to go through into the knockouts. With a lot riding on the outcome of round 3 this matchup could prove tricky and impact how the field stacks up in the last 16.

Japan looms large on the horizon. Champions in 2011 and runners-up in 2015, the Japanese will certainly give the measure of England as far as the rest of the tournament is concerned.

Germany +700 to win Outright with BetOnline The Germans continue in their tradition of success in group action as they are atop the standings behind a 2-0-0 mark. However, it has been mainly a defensive showing by the Germans through the first couple of matches; they won both games by 1-0. Truth be told, they faced stiff competition in Spain and China. Their final round of the group stage looks to be straightforward as they take on South Africa, bottom of the group and most likely heading out of the competition unless they clinch one of the four best third-place positions. Germany have been going quietly about their business in typical no-nonsense fashion but they are certainly a side to spot on your soccer picks should the draw fall in place.

In summary, all four top favourties have lived up to their flattering odds in World Cup futures. However, aside from Germany, who faced stiff opponents in their first two rounds, the remaining top three have had it somewhat straightforward. It is too soon to tell whether one or the other is the likeliest to win the competition. Certainly, after round 3 and the Americans, England and France come up against stiffer tests we can determine better how they stack up. Moreover, with more than 60% of the field going into the knockouts there are a few sleepers to consider such as Italy, Brazil, Netherlands, Sweden and Canada, all of which have got off to a positive start and could shake things up in the knockouts. (See Table 2 below for complete World Cup Odds). 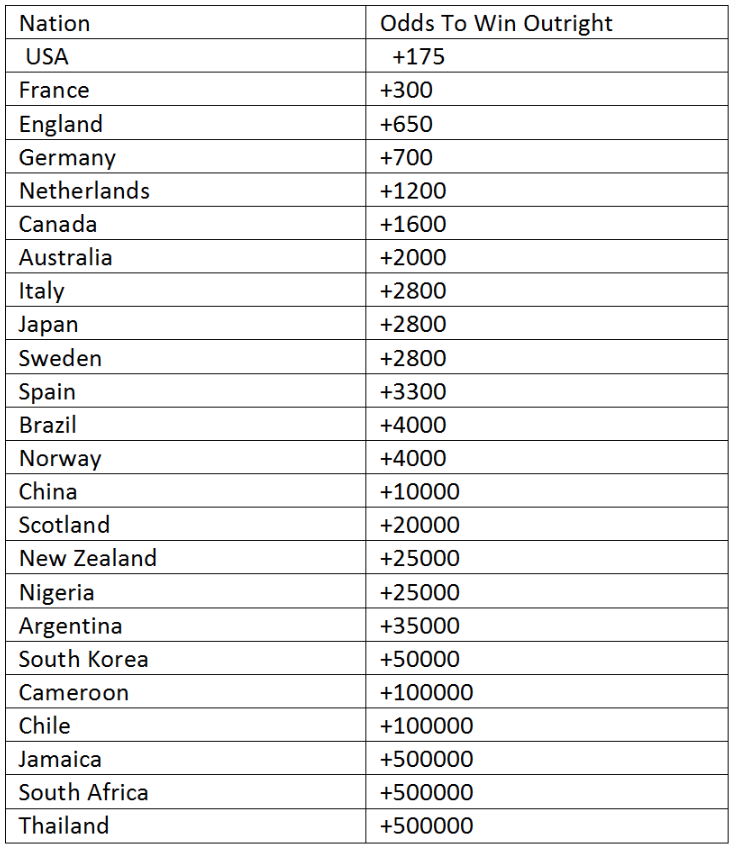