Alessio Di Chirico is a well rounded young fighter who has been climbing the ladder against just the right level of opponents. Di Chirico is 3-2 in the UFC and his well rounded skill set just hasn’t had the chance to shine. He faced several savvy and skilled veterans who made life difficult for him and has taken the last year off to hone his skills. Alessio is riding a 2 fight win streak but decided to take a break from the cage to improve and I think that is an excellent choice as a young rising fighter.

Alessio has knock out power and solid accuracy in his striking. He is a capable grappler with a controlled ground game that will come in hand against the wild Holland. Holland came off of Dana White’s Contender Series and dove immediately into the deep end of the division facing Thiago Santos on short notice just last year. Holland has a belief in his submission game that will lead him to make mistakes when searching for a finish. He is known to make poor choices and accept bad positions just believing that he will be able to find his opponents neck. 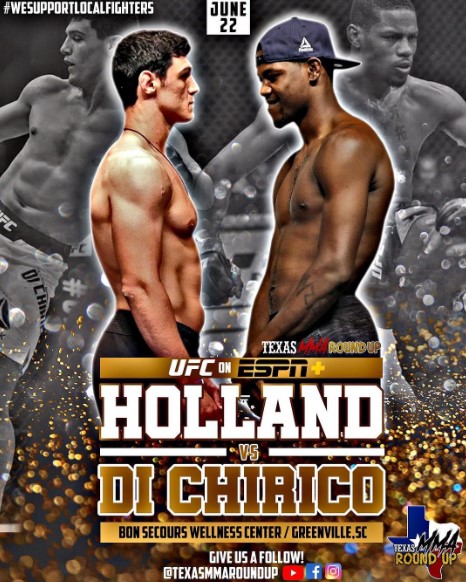 Sporting a record of 14-4, Holland has been right more often than not with a finish rate of 86%, but he is getting to a point in his career where the kind of openings he leaves will get exploited by his opposition. Kevin Holland won a scrably and sloppy decision over Gerald Meerschaert back in March that looked like he could have ended if he had just forced Meerschaert to stand, but he kept putting himself willingly in danger. Kevin has been incredibly active since coming into the UFC with 5 fights in 2018 and he has not taken the time away from the cage to improve. He is physically gifted, but he is young and unpolished. I think this is the spot where he slips up and opens the door for a solid and technical fighter like Di Chirico to steal a fight away from him.

Written By
Clint MacLean
Clint has been an MMA fan for as long as he can remember. He started the Die Hard MMA Podcast and now he happily writes for SBR and appears on the SBR's shows to give breakdowns and picks! Nothing makes me happier than doing shots of Fireball while watching people punch each other and winning cash at the same time!