The Tour de France enters the Alps on Thursday with three key stages that will decide the winner of the 2019 Tour de France. Can Geraint Thomas retain his crown or will Egan Bernal, Steven Kruijswijk or Thibaut Pinot wrestle it from his grasp?

We enter the second rest day of one of the most exciting and closely fought Tours I can remember for quite a while, with the race still most certainly up for grabs. Julian Alaphilippe has been magnificent in his defense of his yellow jersey, his ride in the time trial on Friday and up the Tourmalet on Saturday were just incredible. The man seemed to be able to do it all now &ndash; beat everyone in a time trial, sprint away to solo stage victories, lead out his sprinter and climb with the best climbers in the world on one of the toughest climbs in France.

But it looked on Sunday like all his efforts in the past two weeks was starting to have an effect on him as he finally cracked on the final ascent to Foix Prat d’Albis. But it wasn’t far from the top and in the end, he only shed 27′ to his nearest rival, the defending champion Geraint Thomas. Thomas himself had a bad day on Saturday, losing contact near the top of the Tourmalet, but paced himself to limit his losses and is still very much in this race.

The biggest threat now to Alaphilippe’s lead is Thibaut Pinot, who has been brilliant this weekend, winning on the Tourmalet and helping to crack Alaphilippe on the final climb, attacking away and joining Mikel Landa, even taking the bonus seconds with 2nd place. Oh how he is ruing that 1’40’ he lost in the crosswinds, he is now just 1’50’ off of Alaphilippe’s lead. If he hadn’t lost that time he’d be 1’25’ ahead of Thomas and race-leader elect, should Alaphilippe crack even more in the Alps at the end of this week.

Steven Kruijswijk is still very much in the race, but he needs to try to find time from somewhere, just following wheels will not win the race for him. There is a chance now though that he will settle for a podium place and just ride defensively for the rest of the week.

But don’t rule Geraint Thomas out of this race either. He didn’t have a great TT he said himself, yet he finished 2nd, and he cracked a little on the Tourmalet to shed 36′ to Pinot and 30′ to Alaphilippe. But he seemed to bounce back a bit on the next stage on Sunday &ndash; although he was dropped at first by Pinot’s acceleration he grinded his way back and subsequently attacked away from Alaphilippe to take some time back. He even said that he felt he could have done more but couldn’t chase too hard as they had Egan Bernal up the road. We all know Ineos’s ability to come good when it matters most.

His team-mate Bernal took some time back too Sunday and is now 27′ behind Thomas, 2’02’ behind Alaphilipe, and we are yet to reach the trilogy of high altitude stages in the Alps, his playground. And don’t rule out Emanuel Buchmann either, the German has been fantastically consistent and durable, and is very much in this race, being just 39′ off of Thomas’ time. In fact, there are just 39′ separating 2nd and 6th, one of the tightest top 6’s I can remember for quite a long time.

Can we rule Alaphilippe though? It would seem brave on the face of it as he has been incredible this race and still holds a minute and a half lead over his nearest competitor. He was odds-on at 1.91 (10/11) to take the race on Saturday night after his showing on the Tourmalet but has now been pushed out to 5.0 (4/1) after he started to show the first signs of finally cracking on Sunday.

Instead, despite being only 3rd on the GC, and 1’50’ behind Alaphilippe, it is Thibaut Pinot who is the current 2.2 (6/5) favorite to take the race. And you can see why &ndash; he is looking the strongest in the race, he is full of confidence following the last two mountain stages, his acceleration on summit finishes will gain him more time bonuses and he has one of the best lieutenants in the race in David Gaudu, who has been immense for him in the Pyrenees. And he has momentum &ndash; a huge factor going into the final week &ndash; while Alaphilippe and Thomas might be doubting themselves a little, Pinot surely believes he can now go on to win the race, something that’s reflected in his 6/5 favorite’s price.

So what do we have in store for the rest of the week?

Well, Stage 16 on Tuesday comes after the rest day and it should end in a bunch sprint in Nimes. There are three sprinters who seem to be head and shoulders above the rest in this race, with each of them having won a stage each so far &ndash; Dylan Groenewegen, Elia Viviani, and Caleb Ewan. They’ve all suffered in the mountains to make the time cuts, there will be a lot of tired legs out there, but at these prices, I’d rather be on Caleb Ewan and his Lotto leadout to take this one again. 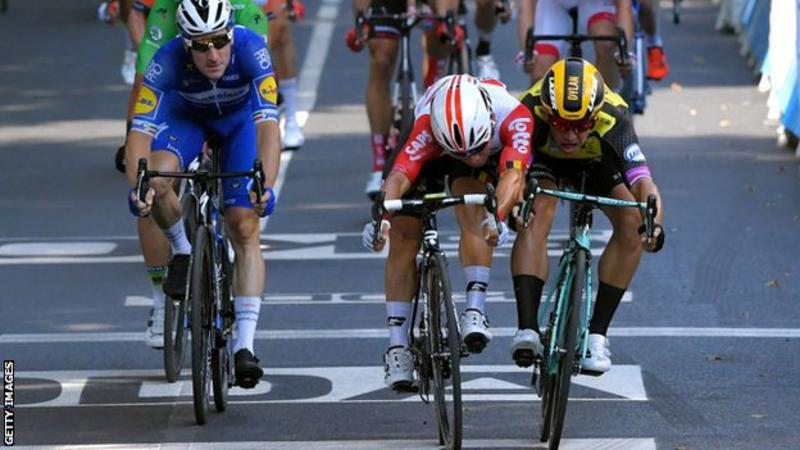 Stage 17 takes them back into the hills again, but it’s only a teaser for what’s to come with a Cat 4 and a Cat 3. It looks like a day for the breakaway so look out for the likes of Thomas De Gendt, Simon Geschke, Tony Gallopin, Alexey Lutsenko, Ben King, Oliver Naesen, Magnus Cort and Fabio Felline.

Stage 18 is where it starts to get serious again as we enter the high Alps proper, with a killer of a stage that takes them over the Col de Vars, Col d’Izoard and Col de Galibier, three climbs over 2,100m, with the Galibier being 2,642m. It should be a day for the GC men again, it could be a day when Thibaut Pinot stamps his authority on this race and solos to victory in Valloire.

Stage 19 is another crucial stage though, with the monster climb of the Col de L’Iseran, the highest point in the race at 2,770m, followed by the pull up to Tignes. It could be the day we see the Colombian Egan Bernal mount his charge in the high altitudes, and if not, we’re sure to see him in the thick of the action on the brutal stage 20 finish to Val Thorens, the final climb in the Tour de France is a monster 33.4kms long, taking them to 2,365m in height.

Expect to see Thibaut Pinot, Geraint Thomas, Egan Bernal and Steven Kruijswijk battling it out for the top 3 spots on the GC, but watch out also for Rigoberto Uran and Mikel Landa for the stage honors.

The final stage is the traditional processionary one with the laps around Paris and the bumpy sprint finish on the Champs Elysees. Expect one last battle between the sprinters who have made it to through the mountains.

As regards the best bets for the rest of the Tour, well, Thibaut Pinot is too short now to be backing at 2.2 (6/5), we’ve already had Thomas and Alaphilippe at odds-on in this race, so you can see taking short prices isn’t always the best idea! Steven Kruijswijk still looks a bit of value at 10.0 (9/1), he will go well in the final mountain stages and should be good enough to take a place at the very least. If you backed him at 19.0 (18/1) last week when I first put him up, then maybe leave it and enjoy that bet.

I think Alaphilippe’s charge will disappear in the Alps and it’s actually a good possibility that he doesn’t even finish in the first 3. Geraint Thomas has shown vulnerabilities, and his Ineos team have also been found wanting for the first time in about 7 years, so he too might find himself under pressure in the Alps too if Groupama and Jumbo Visma keep up the pressure.

My top 3 are now Pinot, Kruijswijk and Bernal, not necessarily in that order, so of the three, I’d rather be on Kruijswijk at 10 (9/1), but if Bernal is let off the leash again in the Alps he could cause some serious damage and could be the one to put Pinot under the most pressure for the win.

In the KOM competition, I think Pinot looks a solid bet now at 13/8, he’s effectively the leader of the competition you could say, as Wellens will fall away in the high mountains. He is just 14pts behind him, but with so many 40pt climbs to come in the last week, if he just tops one or two of them he could easily win this competition.

Most of the other competitions are more or less wrapped-up, as long as the riders finish, with Sagan and Bernal miles clear in the Green and White jerseys competition, with Movistar dominating the Team Classification too.

One other bet I like that is available to back at the moment, is for stage 16 on Tuesday. It’s a bet in the #betyourway list of markets in Betway, where they are offering 2.75 (7/4) that Ewan and Groenewegen both finish in the top 3. I think that’s a pretty solid bet, and if you’re feeling a little braver, take the 6.0 (5/1) on Ewan, Groenewegen, and Viviani filling the first three places, in any order.

It’s been a brilliant Tour de France so far, with fantastic racing and so much drama. We’ve had some superb stage winners and an incredibly gutsy Alaphilippe in the yellow, but as we head in the final week, it is still almost impossible to call who is going to win… Thursday, Friday and Saturday are three stages not to be missed. Allez!