With 13 point races in the books, this Sunday’s Pocono 400 makes the start of the second half of the 26-race regular season schedule. For the second season in a row, a handful of drivers have dominated the early part of the schedule. Last Sunday night at Charlotte in the Coca-Cola 600, Martin Truex Jr. won the race to become the third driver this season to post three point-race victories. Joey Logano was second in that race followed by Kyle Busch in third.

With help from the posted NASCAR futures at 5Dimes online sportsbook to win at Pocono this Sunday, the following three drivers have the best value in their betting odds.

Going back to his first Cup Series victory of the year at Richmond on April 13, Truex has now won three of his last five point-race events. With the win at Charlotte, he matches Kyle Busch and Brad Keselowski with a trio of wins in the first 13 events. The No. 19 Toyota racing team is now sixth in the current Cup Series standings with 448 total points and a lock to make the 10-race playoff. Truex won eight races in 2017 when he went on to win the racing title and four races last season, so he definitely knows the way to Victory Lane.

The main reason I am going with this play as the third-favorite on the board behind Kyle Busch (+275) and Kevin Harvick (+475) is his victory in this week’s event last season. Truex has now won the first race at Pocono twice in the last four years.

I am going with another hot driver at even longer odds as my top-valued contender for Sunday’s race. Since winning this year’s GEICO 500 at Talladega at the end of April, the No. 9 Chevrolet has placed in the top five in its last four point races. Elliott also took second at Martinsville to post a total of five Top 5 finishes this year. His recent racing form has this team tied with Harvick for third place in the current standings with a total of 478 points. He has led at least 43 laps in each of his last four Cup Series events. 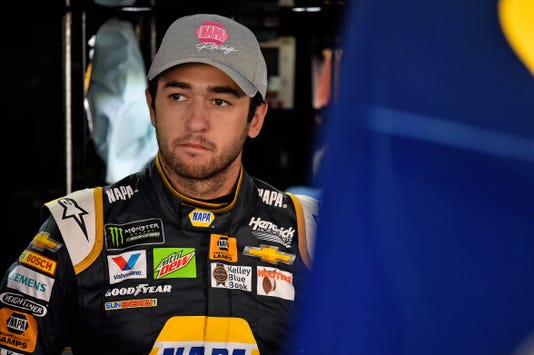 When it comes to his limited experience racing at Pocono in just his fourth full-time Cup Series season, Elliott has placed inside the top 10 in five of his six runs around this oval. He was 10th in this race last season and seventh in the second race here in 2018.

Looking for value further down the list, Blaney is always one of NASCAR’s young guns that tends to catch my eye. His recent form is nothing to get all that excited about with five-straight runs outside of the top 10. However, the No. 12 Ford posted four Top 5 finishes in the five events before this current slide. He led 158 laps at Bristol before fading to fourth.

The main reason Blaney is on my betting radar screen is this week’s track. His first Cup Series career win was in this event in 2017. Racing in his fourth full-time season at NASCAR‘s highest level, he placed sixth in this race last season as part of three Top 10 runs in six Cup Series events at this track.