Caesars Sportsbook has released its odds for the United States Football League Championship.

The league announced its schedule Monday, March 7. The regular season begins with a game between the New Jersey Generals and Birmingham Stallions at Protective Stadium in Birmingham, AL, on Saturday, April 16. 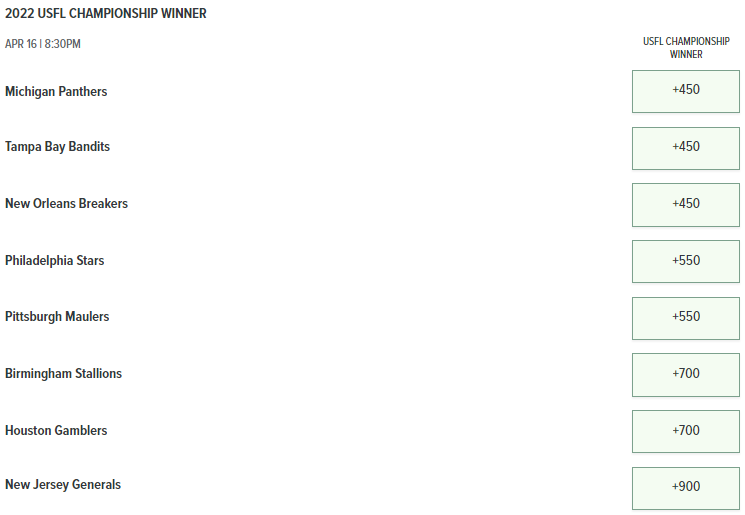 With head coach Jeff Fisher arguably the most recognizable name in the USFL, it isn’t surprising to see his Michigan Panthers tied for the shortest odds to win the championship.

The Tampa Bay Bandits and New Orleans Breakers are also listed with the lowest odds, and again the Bandits’ number is probably coaching-related.

Tampa Bay head coach Todd Haley would rank right behind Fisher as the most notable coach in the USFL. Haley spent 12 years in the NFL as an offensive coordinator and head coach.

There are already 15 states with approved betting on the USFL.

In contrast, Iowa, New Jersey, Oregon, Pennsylvania, and West Virginia have all authorized licensed sports wagering on the USFL.

The USFL playoff games will be played in Canton, OH, at Tom Benson Hall of Fame Stadium. It’s a 20,000-seat facility adjacent to the Pro Football Hall of Fame.

The two semifinal games will be played Saturday, June 25, between the top two teams in each division.

The USFL Championship Game will be held Sunday, July 3.

Written By:
Neil Parker Twitter link
A lifelong Cowboys, Cubs, Maple Leafs and Gators supporter, Neil has been covering sports in print and online since 2011. His past stops include USA TODAY, theScore, DraftKings Playbook and RotoWire among others. He's a graduate of St. Thomas University and Acadia University and spends ample time at KenWo Golf Club.

by Mike Spector 5 hours ago

by Scott Cullen 2 days ago

AutoTrader EchoPark Automotive 500 Odds, Picks: Round of 12 Kicks Off Deep In Heart of Texas

by Rodrigo Villagomez 2 days ago

by Henry John 2 days ago